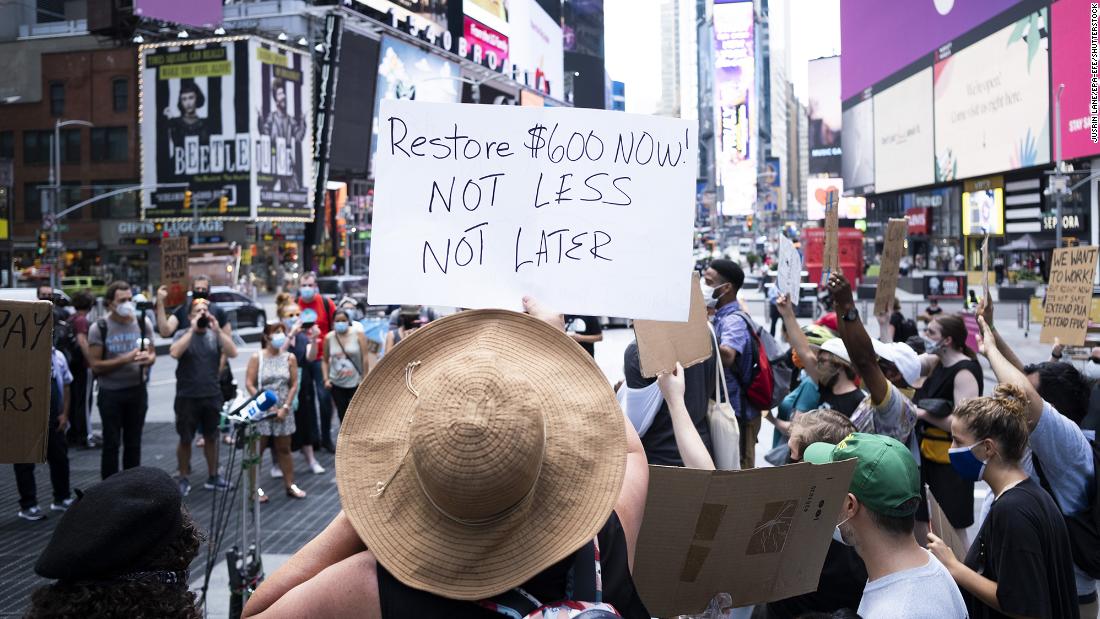 The report met economists’ expectations, and was a small decline from the prior week, but the report was still somewhat of a disappointment. So far, we’ve only seen one week — at the start of August — with fewer than a million claims since March, when the pandemic started to take its toll on America’s job market.

Continued jobless claims, which count people filing at least two weeks in a row, stood at 14.5 million on a seasonally adjusted basis. The on-going decline in continued claims is a good sign that some people who lost their jobs in this crisis are returning to work.

Without the seasonal adjustments, which smooth out the data in normal times but are a distortion during the pandemic, the picture looks slightly different but not necessarily better: initial unadjusted claims stood at 821,591 last week. But, on top of that, 607,806 Americans — more than in the prior week — filed claims for pandemic unemployment assistance, one of the programs Congress devised to help workers who don’t have access to the regular government programs, such as the self-employed. That brings the total of unadjusted first-time claims to 1.4 million.

All in all, 27 million American workers filed for some form of jobless assistance under various government programs during the week ending August 8, representing a decrease of around 1 million claims — but still highlighting that this jobs crisis remains in full force.

Congress’ weekly supplemental $600 in jobless aid expired at the end of July, and lawmakers haven’t been able to agree another round since. Meanwhile President Donald Trump signed an executive order, diverting funding from the Federal Emergency Management Agency to pay for additional weekly benefits worth $300. States can add another $100 for a total $400 supplement, but many have said they can’t afford that.

The Trump administration and some Republican lawmakers have claimed that the $600-a-week benefits have paid many Americans more than they would have made on their jobs. The supplemental benefit has kept people from rejoining the labor force, they argued.

“So far there is no indication yet that the expiration of an extra $600 per week in UI benefits at the end of July 31 has led to a big drop in unemployment,” said PNC’s chief economist Gus Faucher in emailed comments.

In addition to the Labor Department report, the Bureau of Economic Analysis also published its second estimate of second-quarter US gross domestic product — the broadest measure of the economy.

GDP registered its worst collapse on record between April and June as the effect from the pandemic lockdown was in full force. The revised drop is an annualized 31.7% economic contraction, compared with the initial estimate 32.9%. Even with this tiny improvement, the second quarter was still the worst one on record for America’s economy.

The GDP update included corporate profits, which decreased by $227 billion in the quarter. That was a significant decline, but it was less than in the first three months of the year. The pandemic lockdown straddled the first and second quarters, beginning in March with restrictions starting to loosen in April.

In the current, third quarter, GDP growth is expected to roar back. The Federal Reserve Bank of Atlanta predicts the economy to grow at an annual rate of 25.6% between July and September. That’s good news, no doubt. But against the backdrop of millions of people still relying on government aid to make ends meet, it leaves a bitter aftertaste.

Portland and Oregon Food and Dining

Portland and Oregon Food and Dining – oregonlive.comKey Skip to Main Content The open-air space, pouring the award-winning brewery’s wide range of beers, overlooks Providence Park with sweeping views of the West Hills and Northwest Portland. You can get a lot done while waiting for ono chicken. The year-old Grind Wit Tryz draws some of […]