Shiitake is used as an anti-cancer drug in Japan and sanctioned for this purpose by their FDA.

It has many health benefits, such as it’s ability to lower blood pressure and reduce cholesterol. It possesses powerful antioxidant properties that help the body fight the damage of free radicals. It is also known to reduce inflammation. It also has many beneficial vitamins and minerals.

This mushroom contains Lentinan. Lentinan is used by some to treat cancer of the bowel, liver, lung and stomach. It increases the production of beneficial killer cells. It may also be helpful in the treatment of AIDS.

Shiitake may treat and prevent thrombosis (blood clots that decrease blood flow). It some tests an Nihon University in Japan, Shiitake mushroom oil was shown to decrease platelet aggregation due to this mushroom’s lenthionine content.

Shiitake is loaded with powerful antioxidants, like vitamins A, C, D and E, selenium and uric acid. Though more research is needed, it appears that Shiitake may be able to lower high blood pressure.

This mushroom can lower cholesterol levels and boots production of interferon, which exhibits an anti-viral effect. Some studies suggest that this my be a possible treatment for hepatitis.

If you are over 30, you’ll want to take some GF20 with this. Then you’ll be able to run circles around people your own age.What is GF20?

This plant is grown in Asia but can be artificially cultivated anywhere the weather conditions are favorable.

Which Part Of The Plant Is Used

Shiitake mushrooms contain polysaccharides (specificaly lentinan). This is believed to be the source of it’s healing properties.

Shiitake can be eaten fresh or dried and pressed into tablets or capsules. It can also be made into soup or tea.

Precautions and Side Effects:

Shiitake mushroom has been used safely by millions of people of all ages throughout the world for centuries. It is a whole food. If you are pregnant or nursing, please consult with your doctor before taking any health supplement.

Description and History Of Shiitake Mushroom

Shiitake mushroom are an edible fungus that grows on dead trees and hardwood logs in the forests of Asia. Shiitake can also be grown on wooden logs that have been dirlled with hundreds of holes. The mushroom spores and then put in the holes and left to grow.

They have an umbrella shaped hood, are very large with a dark brown color and have have a rich earthy flavor. In ancient Japan the mushroom was so valued, wars were fought over it. The conquring army would take the cultivated Shiitake logs as their prize. In asian cultures it is not only considered a medicinal mushroom, but also a delicacy.

I have often taken Shiitake mushroom to keep my blood pressure lower and to ward off colds and flu in the fall and spring. It’s also good to take as an antioxidant. 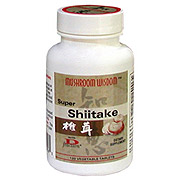 Odd terms sneak into our language every now and then, and this is one of the oddest. Everyone who considers himself in the know about the drug subculture has heard that ‘420’ has something to do with illegal drug use, but when you press them, they never seem to know why, or even what the […]

Credits Inc in Hermiston, OR with Reviews